Tweety Bird is a fictional character in the Warner Bros. Looney Tunes and Merrie Melodies series of animated cartoons. The name “Tweety” is a play on words, as it originally meant “Sweetie”, along with “tweet”, which describes typical sounds of birds. Tweety Bird has appeared in several dozen cartoons.

Despite the widespread speculation that Tweety was female, he is and has always been a male character, something that he often has confirmed in The Sylvester and Tweety Mysteries.

Tweety is, for the most part, a good-natured character happily spending life in his cage or a nest. However, when a cat or other adversary threatens him, he can become downright malicious and devious, even kicking his enemy when he’s down. In many of Tweety’s appearances the bird is shown accompanying his owner, Granny. Granny, a co-star of many Sylvester the Cat and Tweety Bird animated shorts throughout the 1950s and ’60s, is also a Looney Tunes character. 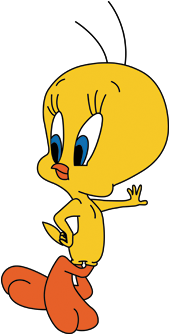 More recently Tweety appears as part of the TuneSquad team in Space Jam. There, he gets picked on and bullied by the Monstars due to his small size, until he retaliates by using Ken po moves on them. He also appears in Looney Tunes: Back in Action, although this “Tweety” is really Taz the Tazmanian Devil in disguise.

Tweety appeared in the 2005 TV show, Loonatics Unleashed, Tweety’s descendant, known as The Royal Tweetums, rules the planet Blanc in the care of its present ruler, Queen Grannicus (Granny’s descendant).

Tweety has appeared in Toys Art and who knows What Else

There have been toys, stuffed dolls, comic books, and in 2008 British artist Banksy‘s New York art installation The Village Pet Store and Charcoal Grill features “Tweety”, an animatronic sculpture of an aged and molting version of the character.