Home Dedications Why do birds sing in the morning?

Why do birds sing in the morning?

(This page dedicated to Chitraparna Sinha)

Why do birds sing in the morning? It’s the triumphant shout: “We got through another night!” 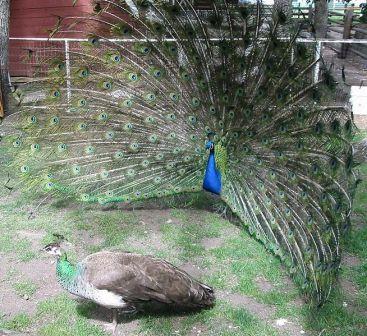 An Indian Blue Peacock (rear) courts a peahen (front). 'Fred' the Peacock tries to woo an unsuspecting Peahen. The Peacock, Pavo cristatus (Linnaeus), is the national bird of India.

The Indian Peafowl is a resident breeder in the Indian subcontinent. The peacock is designated as the national bird of India and the provincial bird of the Punjab (India).

The term peafowl can refer to the two species of bird in the genus Pavo of the pheasant family, Phasianidae. Peafowl are best known for the male’s extravagant tail, which it displays as part of courtship. The male is called a peacock, and the female a peahen.

\\\\\\\
Why do birds sing in the morning? It’s the triumphant shout: “We got through another night!”
Enid Bagnold

\\\\\\\
Eagles may soar, but weasels don’t get sucked into jet engines.
John Benfield

\\\\////
The bird of paradise alights only upon the hand that does not grasp.
John Berry

\\\\\\\
The state bird of New York is the Jaywalk.
Archie Bulger

\\\\\\\
There is nothing in which the birds differ more from man than the way in which they can build and yet leave a landscape as it was before.
Robert Lynd

\\\\\\\
The mosquito is the state bird of New Jersey.
Andy Warhol

\\\\\\\
Use the talents you possess – for the woods would be a very silent place if no birds sang except for the best.
Henry Van Dyke

\\\\\\\
Birds are taken with pipes that imitate their own voices, and men with those sayings that are most agreeable to their own opinions.
Samuel Butler

\\\\\\\
Half the modern drugs could well be thrown out the window, except that the birds might eat them.
Martin H. Fischer

\\\\\\\
It’s a good thing we have gravity, or else when birds died they’d just stay right up there. Hunters would be all confused.
Steven Wright

\\\\\\\
Poetry is like a bird, it ignores all frontiers.
Yevgeny Yevtushenko

\\\\\\\
Over increasingly large areas of the United States, spring now comes unheralded by the return of the birds, and the early mornings are strangely silent where once they were filled with the beauty of bird song.
Rachel Carson

\\\\\\\
You know that if I were reincarnated, I’d want to come back a buzzard. Nothing hates or envies him, or wants him or needs him. He is never bothered and he can eat anything.
William Faulkner

\\\\\\\
If I could come back as anything – I’d be a bird, first, but definitely the command key is my second choice.
Nikki Giovanni

\\\\\\\
You can know the name of a bird in all the languages of the world, but when you’re finished, you’ll know absolutely nothing whatever about the bird . . . So let’s look at the bird and see what it’s doing – that’s what counts. I learned very early the difference between knowing the name of something and knowing something.
Richard P. Feynman

\\\\\\\
I wish the bald eagle had not been chosen as the representative of our country; he is a bird of bad moral character . . . like those among men who live by sharping and robbing, he is generally poor, and often very lousy . . . the turkey is a much more respectable bird, and withal a true original native of America.
Benjamin Franklin

\\\\\\\
Be like the bird in flight . . . pausing a while on boughs too slight, feels them give way beneath her, yet sings knowing yet, that she has wings.
Victor Marie Hugo

\\\\\\\
Different people have different duties assigned to them by Nature; Nature has given one the power or the desire to do this, the other that. Each bird must sing with his own throat.
Henrik Ibsen

\\\\\\\
Magpie, n.: A bird whose theivish disposition suggested to someone that it might be taught to talk.
Ambrose Bierce

\\\\\\\
Ostrich, n.: A large bird to which (for its sins, doubtless) nature has denied that hinder toe in which so many pious naturalists have seen a conspicuous evidence of design. The absence of a good working pair of wings is no defect, for, as has been ingeniously pointed out, the ostrich does not fly.
Ambrose Bierce

\\\\\\\
God gives every bird its food, but he does not throw it into the nest.
Josiah Gilbert Holland

\\\\\\\
Turkey, n. A large bird whose flesh when eaten on certain religious anniversaries has the peculiar property of attesting piety and gratitude. Incidentally, it is pretty good eating.
Ambrose Bierce

\\\\\\\
Growing up, my Mom always claimed to feel bad when a bird would slam head-first into our living room window. If she “really” felt bad, though, she’d have moved the bird feeder outside.
Rich Johnson

\\\\\\\
Women and birds are able to see without turning their heads, and that is indeed a necessary provision for they are both surrounded by enemies.
James Stephens

\\\\\\\
Bird watching is a bloodless expression of manÕs primitive hunting instincts. We have substituted binoculars and cameras for the gun, but we still seek a trophy – A new species on a life list, or photographs of one of earthÕs rarest and most exquisite creatures. Our search may take us no farther than a nearby meadow – Or it can lead to the cloud forests of tropical mountains.
James A. Kern

\\\\\\\
If one cannot catch a bird of paradise, better take a wet hen.
Nikita Khrushchev

Take Fate by the Throat

///////
A statesman is an easy man, He tells his lies by rote; A journalist makes up his lies And takes you by the throat; So stay at home and drink your beer And let the neighbours vote.
William Butler Yeats

///////
Education is the process of driving a set of prejudices down your throat.
Martin H. Fischer

///////
He was the mildest manner’d man That ever scuttled ship or cut a throat.
Lord Byron

///////
I resolved to take Fate by the throat and shake the living out of her.
Louisa May Alcott

///////
The llama is a woolly sort of fleecy hairy goat With an indolent expression and an undulating throat – Like an unsuccessful literary man.
Hilaire Belloc

///////
You need that guy like a giraffe needs a strep throat.
Ann Landers