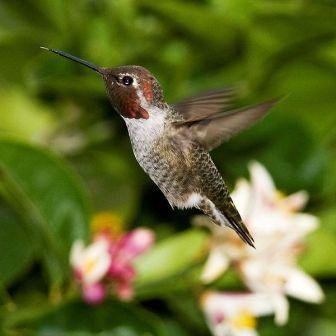 Anna's Hummingbird: Have you seen this bird?

The Anna’s Hummingbird (Calypte anna) is a medium-sized hummingbird native to the west coast of North America. This bird was named after Anna Massena, Duchess of Rivoli.

Their breeding habitat is open wooded or shrubby areas and mountain meadows along the Pacific coast from British Columbia to Arizona.

Unlike most hummingbirds, the male Anna’s Hummingbird sings during courtship. The song is thin and squeaky. During the breeding season, males can be observed performing a remarkable display, called a display dive, on their territories.

Males unmistakable when red crown is seen but beware of poor lighting conditions. Females and immatures are fairly large and gray breasted, and often show the distinctive rosy-red gorget color on the throat. Costa’s and the two Archilochus hummingbirds are the most likely identification contenders, but are smaller with whiter breasts and different call notes.

Anna’s Hummingbirds are found along the western coast of North America, and inland to southern Arizona. They tend to be permanent residents within their range, and are very territorial. However, birds have been spotted far outside their range in such places as southern Alaska, Saskatchewan, New York, Florida and Louisiana.

Anna’s Hummingbirds are the only hummingbirds to spend the winter in northern climates; they are able to do this as there are enough winter flowers and food to support them.

There are an estimated 1.5 million Anna’s Hummingbirds. Their population appears to be stable, and they are not considered an endangered species.