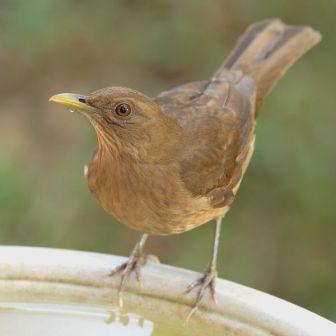 It ranges from South Texas to northern Colombia. It is limited to the Atlantic slope, except for a population around Oaxaca City that probably originates from escaped cagebirds.

The Clay-colored Robin is unlikely to be confused with other species in its limited United States range.

In much of its range it is familiar in yards and gardens, similar to some other thrushes such as the American Robin, the Eurasian Blackbird, and the Song Thrush.

The Clay-colored Thrush usually forages for fruit or invertebrates on or near the ground. Flocks may feed high in fruiting trees. This Thrush will follow army ants to feed on small prey disturbed by the ant columns.

It builds a heavy cup nest of grass, moss, and mud on a firm support above the ground. It is aggressive in defense of its nest, but generally is not particularly territorial.