Bird quotes about and Referencing Swallows

The Barn Swallow (Hirundo rustica) is the most widespread species of swallow in the world.

In Anglophone Europe it is just called the Swallow; in Northern Europe it is the only common species called a “swallow” rather than a “martin”. 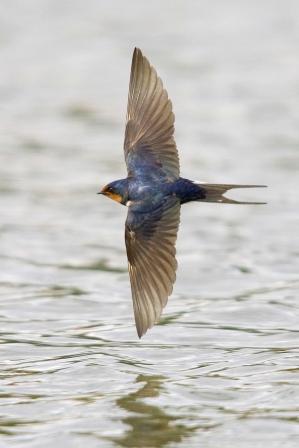 Similar species:
The Barn Swallow can be told from all swallows by its deeply forked tail.

There are six subspecies of Barn Swallow, which breed across the Northern Hemisphere.

Four are strongly migratory, and their wintering grounds cover much of the Southern Hemisphere as far south as central Argentina, the Cape Province of South Africa, and northern Australia.

The Barn Swallow is a bird of open country which normally uses man-made structures to breed and consequently has spread with human expansion.

|||||||
Human good turns out to be activity of soul exhibiting excellence, and if
there is more than one sort of excellence, in accordance with the best and
most complete. For one swallow does not make a summer, nor does one day; and
so too one day, or a short time, does not make a man blessed and happy.
Aristotle

|||||||
How amiable are thy tabernacles,O L of hosts! 96 My soul longeth, yea, even fainteth for the courts of the L: my heart and my flesh crieth out for the living God. Yea, the sparrow hath found an house, and the swallow a nest for herself, where she may lay her young, even thine altars, O L of hosts, my King, and my God.
Bible (Old Testament) Psalms 84:1.

|||||||
He will swallow up death in victory; and the Lord GOD will wipe away tears from off all faces; and the rebuke of his people shall he take away from off all the earth: for the L hath spoken it.
Bible (Old Testament) Isaiah 25:8.

|||||||
Beneath those rugged elms, that yew-tree’s shade, Where heaves the turf in many a mouldering heap, Each in his narrow cell for ever laid, The rude forefathers of the hamlet sleep. The breezy call of incense-breathing Morn, The swallow twitt’ring from the straw-built shed, The cock’s shrill clarion, or the echoing horn, No more shall rouse them from their lowly bed.
Thomas Elegy Gray

|||||||
O Swallow, Swallow, flying, flying South, Fly to her, and fall upon her gilded eaves, And tell her, tell her, what I tell to thee. O tell her, Swallow, thou that knowest each, That bright and fierce and fickle is the South, And dark and true and tender is the North.
Tennyson

|||||||
O tell her, Swallow that thy brood is flown: Say to her, I do but wanton in the South, But in the North long since my nest is made.
Tennyson

|||||||
We swallow greedily any lie that flatters us, but we sip only little by little at a truth we find bitter.
Denis Diderot

|||||||
Women swallow at one mouthful the lie that flatters, and drink drop by drop the truth that is bitter.
Denis Diderot

|||||||
For they have sown the wind, and they shall reap the whirlwind: it hath no stalk; the bud shall yield no meal: if so be it yield, the strangers shall swallow it up.
Bible

|||||||
Be careful what you swallow. Chew!
Gwendolyn Brooks

|||||||
By following the concept of “one country, two systems,” you don’t swallow me up nor I you.
Deng Xiaoping