Republicans study the financial pages of the newspaper. Democrats put them in the bottom of the bird cage.

A Will Stanton quotation

The Black-bellied Whistling-duck (Dendrocygna autumnalis), formerly also called Black-bellied Tree Duck, is a whistling-duck that breeds from the southernmost United States and tropical Central to south-central South America. In the USA, it can be found year-round in parts of southeast Texas, and seasonally in southeast Arizona, and Louisiana’s Gulf Coast. 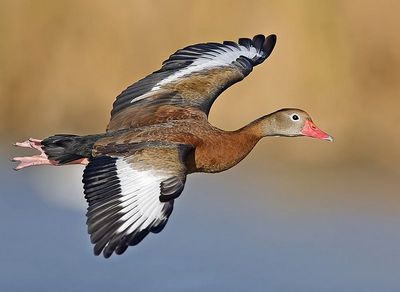 Have you spotted this bird?

Multiple females often lay eggs in the same nest. This can lead to very large clutch sizes. in some cases. Such nests are less likely to hatch.

Food: This species is locally known as the “cornfield duck,” on account of its habits of frequenting the cornfields to feed on the corn, where it is said to do considerable damage.
Winter range: Resident in most of its range. Winters at least as far north as Vera Cruz and Mazatlan.

Migrations: Arrives in Texas in April and leaves in September, October, and November.

Republicans study the financial pages of the newspaper. Democrats put them in the bottom of the bird cage.