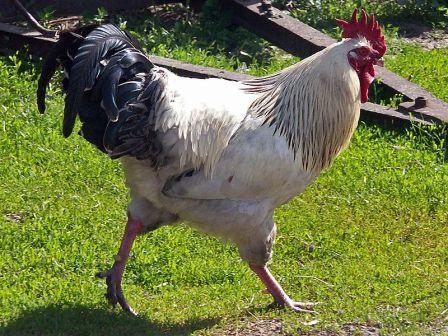 |||||||
It is not unprofessional to give free legal advice, but advertising that the first visit will be free is a bit like a fox telling chickens he will not bite them until they cross the threshold of the hen house.
– Warren E. Burger

|||||||
It’s true that I did get the girl [Julia Roberts], but then my grandfather always said, “Even a blind chicken finds a few grains of corn now and then.
– Author unknown

|||||||
Love, like a chicken salad a restaurant has, must be taken with blind faith or it loses its flavor
– Helen Rowland

|||||||
Physically there is nothing to distinguish human society from the farm-yard except that children are more troublesome and costly than chickens and calves and that men and women are not so completely enslaved as farm stock.
– George Bernard Shaw

|||||||
Regard it as just as desirable to build a chicken house as to build a cathedral.
– Frank Lloyd Wright

|||||||
Religion is no more the parent of morality than an incubator is the mother of a chicken.
– Lemuel K. Washburn

|||||||
The Bluebird of Happiness long absent from his life, Ned is visited by the Chicken of Depression
– Gary Larson

|||||||
The chicken is never declared in the court of hawks. – Cape Coast, Ghana
– African Proverb

|||||||
The chickens have come home to roast
– Jane Sherwood Ace

|||||||
The key to everything is patience. You get the chicken by hatching the egg, not by smashing it.
– Arnold H. Glasgow

|||||||
The networks are not some chicken-coop manufacturing lobby whose calls nobody returns.
– Ralph Nader

|||||||
The pig and the chicken were on their way to breakfast, trying to decide what to have. When chicken said, ”Let’s have ham and eggs.” The pig then replied, ”That’s fine for you, it’s a small donation on your part, but it’s a total sacrifice for me.
– Author unknown

|||||||
We can see a thousand miracles around us every day. What is more supernatural than an egg yolk turning into a chicken?
– S. Parkes Cadman

|||||||
When I warned them (the French) that Britain would fight on alone whatever they did, their generals told their Prime Minister and his divided Cabinet, “In three weeks England will have her neck wrung like a chicken
– Winston Churchill