Quote – Proverb
Definitions as applying to these short passages on BirdQuote.com 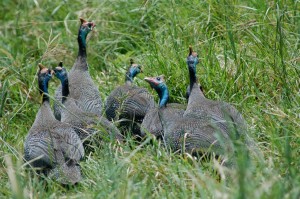 Quote
–verb (used with object)
1. to repeat (a passage, phrase, etc.) from a book, speech, or the like, as by way of authority, illustration, etc.
2. to repeat words from (a book, author, etc.).
3. to use a brief excerpt from: The composer quotes Beethoven’s Fifth in his latest work.
4. to cite, offer, or bring forward as evidence or support.
–verb (used without object)
7. to make a quotation or quotations, as from a book or author.
–noun
9. a quotation.

1. To repeat or copy the words of (another), usually with acknowledgment of the source.
2. To cite or refer to for illustration or proof.
v. intr.

Proverb
–noun
1. a short popular saying, usually of unknown and ancient origin, that expresses effectively some commonplace truth or useful thought; adage; saw.
2. a wise saying or precept; a didactic sentence.
3. a person or thing that is commonly regarded as an embodiment or representation of some quality; byword.
4. Bible. a profound saying, maxim, or oracular utterance requiring interpretation.
1. A short pithy saying in frequent and widespread use that expresses a basic truth or practical precept. See Synonyms at saying.
1. An old and common saying; a phrase which is often repeated; especially, a sentence which briefly and forcibly expresses some practical truth, or the result of experience and observation; a maxim; a saw; an adage.
2. A striking or paradoxical assertion; an obscure saying; an enigma; a parable.
3. A familiar illustration; a subject of contemptuous reference.

A brief, memorable saying that expresses a truth or belief, such as “A friend in need is a friend indeed.”

a trite maxim; a similitude; a parable.

Note: These definitions are excerpts from the many definitions of quote and proverb in www.Dictionary.com