The duck test is a humorous term for a form of inductive reasoning. Here’s how it can be explained:

The test implies that a person can figure out the true nature of an unknown subject by observing this subject’s readily identifiable traits. It is sometimes used to counter abstruse arguments that something is not what it appears to be.

The test is often used to identify something that is supposedly bad, and to justify the use of inductive logic in meting out punishment.

It is unclear who coined the saying “If it looks like a duck, swims like a duck…”, more than one reference to it claimed different people for the saying. According to Wikipedia the term duck test is still frequently used in the United States to describe the process of attributing the identity of an unknown based on its traits, especially in certain forms of computing. 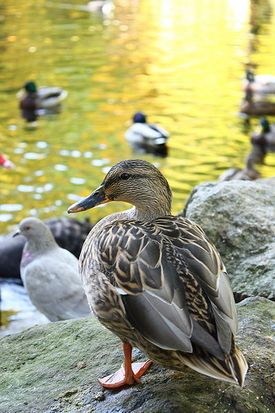 The duck test is common the United Kingdom, where it is sometimes called the “British Standard (BS) Duck Test” in imitation of the system of national standards.

Variations
In computer programming, duck typing is a style of dynamic typing in which an object’s current set of methods and properties determines the valid semantics, rather than its inheritance from a particular class or implementation of a specific interface. The name of the concept refers to the duck test.

///////
During molting season, ducks lose feathers and can’t fly for about a month.

///////
Ducks’ feet can’t feel cold because their feet have no nerves or blood vessels thus making the duck unable to feel cold. 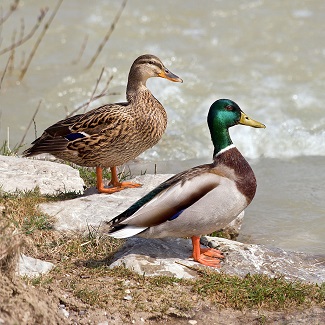 ///////
Airplanes in America collide with an average of 100 ducks a year (according to federal records).

|||||||
Being born in a duck yard does not matter, if only you are hatched from a swan’s egg. ~ Hans Christian Andersen

|||||||
Be like a duck. Calm on the surface, but always paddling like the dickens underneath. ~ Michael Caine

|||||||
What, exactly, is the internet? Basically it is a global network exchanging digitized data in such a way that any computer, anywhere, that is equipped with a device called a ‘modem’, can make a noise like a duck choking on a kazoo ~ Dave Barry