Home Blog Use the talents you possess…

Use the talents you possess… 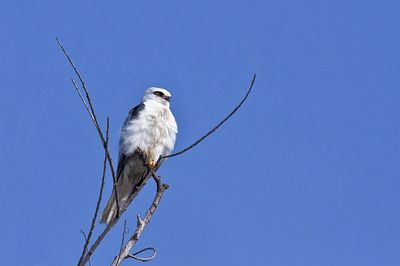 The White-tailed Kite (Elanus leucurus) is an elanid kite found in western North America and parts of South America.

For some recent decades, it united with the Black-winged Kite of Europe and Africa in Elanus caeruleus, and collectively called “Black-shouldered Kite”

Similar species:
Gulls and terns are similar in coloration but lack black shoulder and wrist marks and have a different bill shape. Mississippi Kite has a similar shape, but is much darker in all plumages, never having a white breast, white tail, or the black shoulder or wrist marks of the White-tailed Kite.

More recently it was argued that the White-tailed Kite differed from the Old World species in size, shape, plumage and behavior, and that these differences were sufficient to warrant specific status. This argument was accepted by the American Ornithologists’ Union, so the White-tailed Kite has its original name back. Meanwhile, the Old World E. caeruleus is again called Black-winged Kite, while the name Black-shouldered Kite is now reserved for an Australian species, Elanus axillaris, which had also been lumped into E. caeruleus but now regarded as separate again.

White-tailed Kites feed principally on rodents, and they are readily seen patrolling or hovering over lowland scrub or grassland. They rarely if ever eat bird, and even in open cerrado, mixed-species feeding flocks will generally ignore them.