Home Quotes/Quotations A bird is distinguished by its note

A bird is distinguished by its note

The Common Raven (Corvus corax), is a large all-black passerine bird in the crow family. It is also known as also known as the Northern Raven. The raven is a cosmopolitan species, widely distributed over all the continents of the Northern Hemisphere; it has been separated into several subspecies, only two of which are recognized as North American.

The haunts of ravens and their behavior vary greatly in different portions of their range, depending on where they can most easily find their food and where they are least likely to be disturbed. 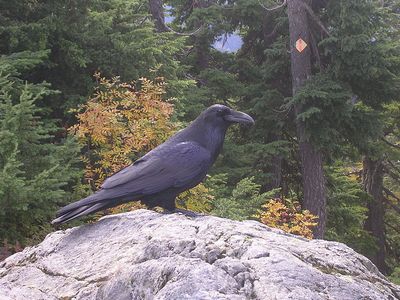 In the far north they range widely over the open treeless tundra, along the seacoast and the banks of rivers, hunting for the carcasses of animals slain by hunters and the remains of sea-animal life washed up by the storms, or stealing the bait from fox traps.

Here they are also common about the Hudson’s Bay Co. stations and the camps and villages of the natives, where they can usually find scraps and are not molested.

The Raven is essentially a solitary bird and the nests of different pairs are usually a considerable distance apart.

Food: The northern raven is one of our most omnivorous birds and a filthy feeder. Almost any kind of animal food that it can catch, kill, or find is grist to its mill. In the far north, especially in winter, it must live largely on carrion, the carcasses of various animals that it finds cast up on the shores.

Bird Quote Notice
If you have or know of a bird quote, bird quotes, or a bird quotation not yet on the site please submit it to Birdquote.com for others to enjoy.