|||||||
All the sparrows on the rooftops are crying about the fact that the most imperialist nation that is supporting the colonial regime in the colonies is the United States of America.
~ Nikita Khrushchev

|||||||
And at that moment, a lilting melody lifts to the moon as a single sparrow sings.
~ Elaine, Lady of Shalott

|||||||
For you know, nuncle, The hedge-sparrow fed the cuckoo so long That it’s had it head bit off by it young.
~ William Shakespeare

|||||||
Happy is the person who not only sings, but feels God’s eye is on the sparrow, and knows He watches over me. To be simply ensconced in God is true joy.
~ Alfred A. Montapert

|||||||
I am certain that the Lord, who notes the fall of a sparrow, looks with compassion upon those who have been called upon to part, even temporarily, from their precious children.
~ Thomas S. Monson 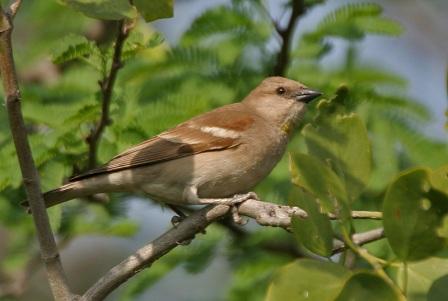 |||||||
I am like a pelican of the wilderness: I am like an owl of the desert. I watch, and am as a sparrow alone upon the house-top.
~ Bible

|||||||
I once had a sparrow alight upon my shoulder for a moment, while I was hoeing in a village garden, and I felt that I was more distinguished by that circumstance that I should have been by any epaulet I could have worn.
~ Henry David Thoreau

|||||||
I’ve got billions of sparrows to worry about as well as everything else’. So there’s the whole idea that whatever it is that you believe, it can never be valid unless you have some consensus reality demonstration.
~ Todd Rundgren

|||||||
My sparrow, she flickers and wakes and sings and sings.
~ Lisa Ann Sandell (Song of the Sparrow)

|||||||
Olivier’s idea of introspection was to hood his eyes, dentalize his consonants and let the camera circle his blondined head like a sparrow looking for a place to deposit its droppings.
~ Robert Brustein

|||||||
People expect the clergy to have the grace of a swan, the friendliness of a sparrow, the strength of an eagle and the night hours of an owl – and some people expect such a bird to live on the food of a canary.
~ Edward Jeffrey

|||||||
Tell me not of joy: there’s none Now my little sparrow’s gone; He, just as you, Would toy and woo, He would chirp and flatter me, He would hang the wing awhile, Till at length he saw me smile, Lord! how sullen he would be!
~ William Cartwright

|||||||
The brawling of a sparrow in the eaves, The brilliant moon and all the milky sky, And all that famous harmony of leaves, Has blotted out man’s image and his cry.
~ William Butler Yeats

|||||||
The hedge-sparrow fed the cuckoo so long, / That it had it head bit off by it young.
~ William Shakespeare

|||||||
The League is very well when sparrows shout, but no good at all when eagles fall out.
~ Benito Mussolini