Home Blog Who gets the bird…

Who gets the bird…

Who gets the bird, the hunter or the dog?

This quote is dedicated to a cute little dog we’ll call Chester. 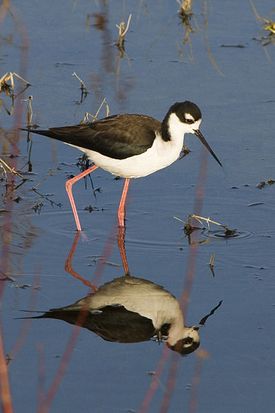 The flight of the bird is steady and direct, but not particularly swift; the bill is held straight out in front and the legs are extended backwards, giving the bird a long, slim appearance. Over their eggs or young, these birds sometimes hover on steadily heating wings with dangling legs. In their excitement they sometimes climb up into the air and make startling dives.

These birds are essentially waders. They are highly specialized for wading. That’s where they show to best advantage.

They are found in estuarine, lacustrine, salt pond and emergent wetland habitats. It is generally a lowland bird but in Central America has been found up to 8,200 ft elevation. It’s commonly seen in llanos habitat in northern South America. It is also found in seasonally flooded wetlands. This bird is resident year-round at the Salton Sea in California.

Who gets the bird, the hunter or the dog?