|||||||
A friend gave them a Bluebird book
And ever since they have been hooked.
First a plan and then a house
Put together by a helpful spouse.
– “Bluebird Bob” Walshaw, First Bluebirds, 2002 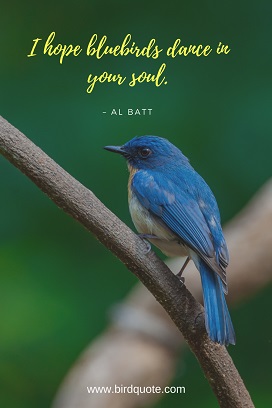 |||||||
And when he sings to you, Though you’re deep in blue, You will see a ray of light creep through,
And so remember this, life is no abyss, Somewhere there’s a bluebird of happiness. Life is sweet, tender and complete, when you find the bluebird of happiness.
– Bluebird of Happiness, lyrics by Edward Heyman & Harry Parr Davies, 1934

|||||||
Bluebird flying high,
Tell me what you sing.
If you could talk to me,
What news would you bring
Of voices in the sky?
– The Moody Blues, In Search of the Lost Chord, lyrics from Voices in the Sky, Justin Hayward, 1968 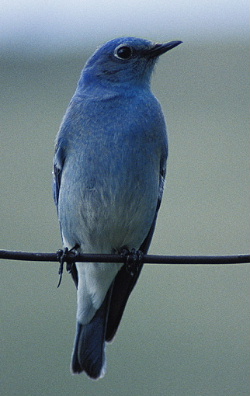 |||||||
But there be others, happier few, The vagabondish sons of God,
Who know the by-ways and the flowers, And care not how the world may plod.
They idle down the traffic lands, And loiter through the woods with spring;
To them the glory of the earth Is but to hear a bluebird sing.
– From The Mendicants, Bliss Carman (1861–1929)

|||||||
Late at night when the wind is still
I’ll come flying through your door,
And you’ll know what love is for.
I’m a bluebird, I’m a bluebird…
– Paul McCartney, Band on the Run, lyrics to Bluebird

|||||||
Listen to my bluebird laugh. She can’t tell you why. Deep within her heart, you see, she knows only crying. Just crying. There she sits, a lofty perch. Strangest color blue. Flying is forgotten now. Thinks only of you. Just you. …. Soon she’s going to fly away. Sadness is her own. Reverse of a death of tears and go home, and go home.
– Bluebird by Buffalo Springfield

|||||||
Mister Bluebird’s on my shoulder, It’s the truth, it’s actual, Ev’rything is satisfactual, Zip-a-dee-doo-dah, zip-a-dee-ay,Wonderful feeling, wonderful day…
– from the film The Song of the South, words by Ray Gilbert, 1945

|||||||
Soft moss a downy pillow makes, and green leaves spread a tent,
Where Faerie fold may rest and sleep until their night is spent.
The bluebird sings a lullaby, the firefly gives a light,
The twinkling stars are candles bright, Sleep, Faeries all, Good Night.
– Elizabeth T. Dillingham, “A Faery Song”

|||||||
The Bluebird, shifting his light load of song
From post to post along the cheerless fence…
– Under the Willows, by James Russell Lowell

|||||||
There’s a bluebird on your windowsill, There’s a rainbow in your sky, There are happy thoughts, your heart to fill, Near enough to make you cry.
– Elizabeth Clark, Bluebird on Your Windowsill (song)

|||||||
Where are those little bluebirds?
I ask where did they go?
I’m hoping they’ll surprise me.
I’m hoping that they’ll show.
I’m looking for that flash of blue
Before we get some snow!
– Lorraine Mastalski, 11/7/03

|||||||
The mockingbird is truly named, for mockingly says he,
“I mimic birds you’d never hear, if it were not for me.”
These are birds that won’t be found in your places strifed and harrowed,
you’ve overbuilt, overrun, so overly house-sparrowed.
You’ve never heard, so never miss, a plaintive bluebird sing.
But more than birds, entire worlds, have fled upon the wing.
– Henry Smith

“There’s a bluebird in my heart that
wants to get out
but I’m too tough for him,
I say, stay in there, I’m not going
to let anybody see
you. …
Click here for complete poem