A person or thing that isn’t properly able to function, especially one that was previously proficient. This description of ‘lame duck’ is often applied to politicians who are in their final term of office. Colleagues and electors are looking toward a successor. It is also sometimes used to describe office-holders who have lost an election but have not yet left office.

In fairly recent years both George W. Bush and Tony Blair, unable to see run again for office, have been called lame ducks. The actual origin of the term is not related to politics, however, and is quite specific in meaning. It comes from the London Stock Market and referred to investors who were unable to pay their debts. 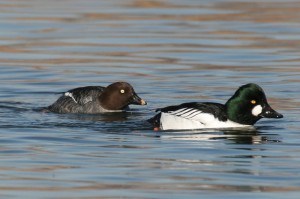 Female and male(right) - Name these birds