Who has Coppery, Keen Claws? 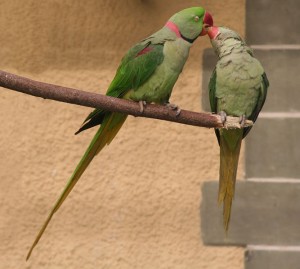 The Bird With The Coppery, Keen Claws is a poem from Wallace Stevens’s first book of poetry, Harmonium. It was originally published in 1921.

Above the forest of the parakeets,
A parakeet of parakeets prevails,
A pip of life amid a mort of tails.

(The rudiments of tropics are around,
Aloe of ivory, pear of rusty rind.)
His lids are white because his eyes are blind.

He is not paradise of parakeets,
Of his gold ether, golden alguazil,
Except because he broods there and is still.

Panache upon panache, his tails deploy
Upward and outward, in green-vented forms,
His tip a drop of water full of storms.

But though the turbulent tinges undulate
As his pure intellect applies its laws,
He moves not on his coppery, keen claws.

He munches a dry shell while he exerts
His will, yet never ceases, perfect cock,
To flare, in the sun-pallor of his rock.