Home Blog If men had wings…

If men had wings… 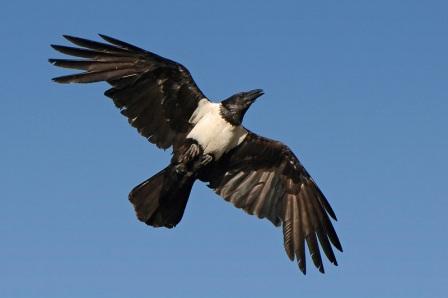 Pied Crow: Have you seen this bird?

The Pied Crow (Corvus albus) is a widely distributed African bird species in the crow genus.

The Pied Crow is perhaps better thought of as a small crow-sized Raven, especially as it can hybridise with the Somali Crow (Dwarf Raven) where their ranges meet in the Horn of Africa.

This species, Africa’s most widespread member of the genus Corvus, occurs from Sub-Saharan Africa, specifically Senegal, Sudan, Somalia and Eritrea down to the Cape of Good Hope and on the large island of Madagascar, the Comoros islands, Aldabra, Zanzibar, Pemba and Fernando Po.

It inhabits mainly open country with villages and towns nearby. It does not occur in the equatorial rainforest region. It is rarely seen very far from human habitation.

Pied Crows are generally encountered in pairs or small groups, although an abundant source of food may bring large numbers of birds.

Most of its food is obtained from the ground such as insects and other small invertebrates, small reptiles, small mammals, young birds and eggs, grain, peanuts, carrion and any scraps of human food and fruit.

The American crow is found in every USA state except?

Answer at bottom of page