Home Blog We never miss the music until…

We never miss the music until…

Dr. J. G. Cooper discovered this tiny and inconspicuous warbler at Fort Mojave, on the Arizona side of the Colorado River, in the spring of 1861. He named it in honor of Miss Lucy Baird, daughter of Prof. Spencer F. Baird.

It might well have been named the mesquite warbler, as its distribution coincides very closely with that of this tree, which seems to furnish its favorite home, most of its nesting sites, and much of its foraging area. 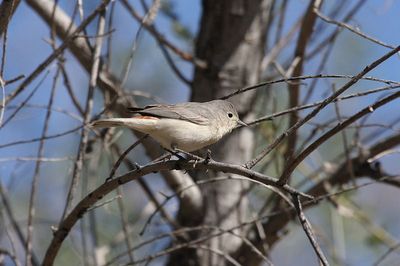 Lucys Warbler: Have you seen this bird?

Similar species:
The whitish undertail coverts of the Lucy’s Warbler separate it from other grayish warblers like Virginia’s and Orange-crowned that have yellow undertail coverts. Bell’s Vireo is somewhat similar but has a heavier bill and lacks rusty uppertail coverts.

Lucy’s is the only warbler besides Prothonotary to nest in cavities. Lucy’s Warblers inhabit riparian mesquite and brushy country of the southwestern United States and northwestern Mexico.

These strictly insectivorous birds forage actively, looking for the caterpillars, beetles, and leafhoppers that compose much of their diet.