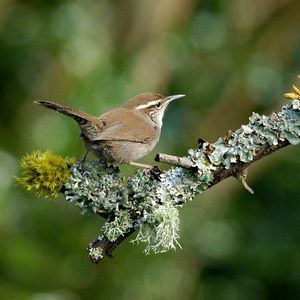 This bird is the eastern representative of a widely distributed species that has been subdivided into 12 additional subspecies in western North America. It’s breeding range, is from southeastern Nebraska, northern Illinois, southern Michigan, and central Pennsylvania south to central Arkansas, northern Mississippi, central Alabama, central Georgia, and the highlands of South Carolina.

It can be seen from southwestern British Columbia and the Pacific coast region and from central United States to southern Mexico. The commonest numbers of eggs found in their nests are from 5 to 7. Perhaps 7 might be the average set.

This bird is a gentle and confiding bird, rather courting than avoiding human society. It is a familiar dooryard bird throughout most of its range. Almost any suitable cavity or place of support will suit this bird for a nesting site.

Civilization has provided this bird with an unusual variety of homes. Any opening of ready access invites its attention; among those used are holes in fence posts, tin cans, empty barrels, discarded clothing hung in buildings, baskets, bird boxes, deserted automobiles, oil wells, and crevices in stone, brick, or tile walls.