Home Quotes/Quotations Happy as a duck in water

Happy as a duck in water 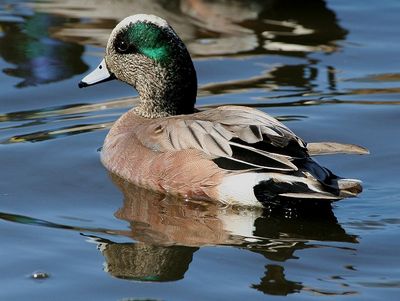 American Wigeon male (drake): Have you seen this bird?

The American Wigeon (also American Widgeon or Baldpate), Anas americana is a species of wigeon in the dabbling duck genus Anas.

It is a common and widespread duck. This dabbling duck is migratory and winters farther south than its breeding range.

Adult in alternate plumage is unmistakable. All plumages distinguished from all other dabbling ducks (except Eurasian Wigeon) by pale gray or white secondary coverts in flight. At rest Wigeon have a distinctive steep forehead and gently sloped rear part of the head, as well as pale blue bills. The rare Eurasian Wigeon is very similar in female, immature and eclipse male plumages and is safely distinguished only in flight by its gray, not white, axillars.

It is a bird of open wetlands, such as wet grassland or marshes with some taller vegetation, and usually feeds by dabbling for plant food or grazing.

It nests on the ground, near water and under cover.

The American Wigeon is a noisy species. It is a rare but regular vagrant to western Europe. It is highly gregarious outside of the breeding season and will form large flocks.