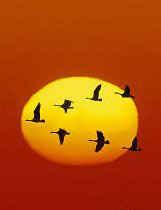 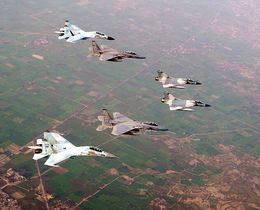 A V formation (sometimes called a skein) is the symmetric V-shaped flight formation of flights of geese, ducks and other migratory birds. V formations are also used on military flight missions.

Flying in a V formation aids the birds in covering long distances efficiently. All the birds except the first are flying in the upwash from the wingtip vortices of the bird ahead. The birds in the formation take turns flying first.The birds flying at the tips and at the front are rotated in a timely cyclical fashion to spread flight fatigue equally among the flock members. The formation also makes communication easier and allows the birds to maintain visual contact with each other.

Visual contact is why V formations (and the asymmetric echelon formations) are also commonly adopted by flights of military aircraft engaged on a common mission.The V formation is also common in ceremonial flyovers and airs how flights.