Happy is the person

An Alfred A. Montapert Quotation 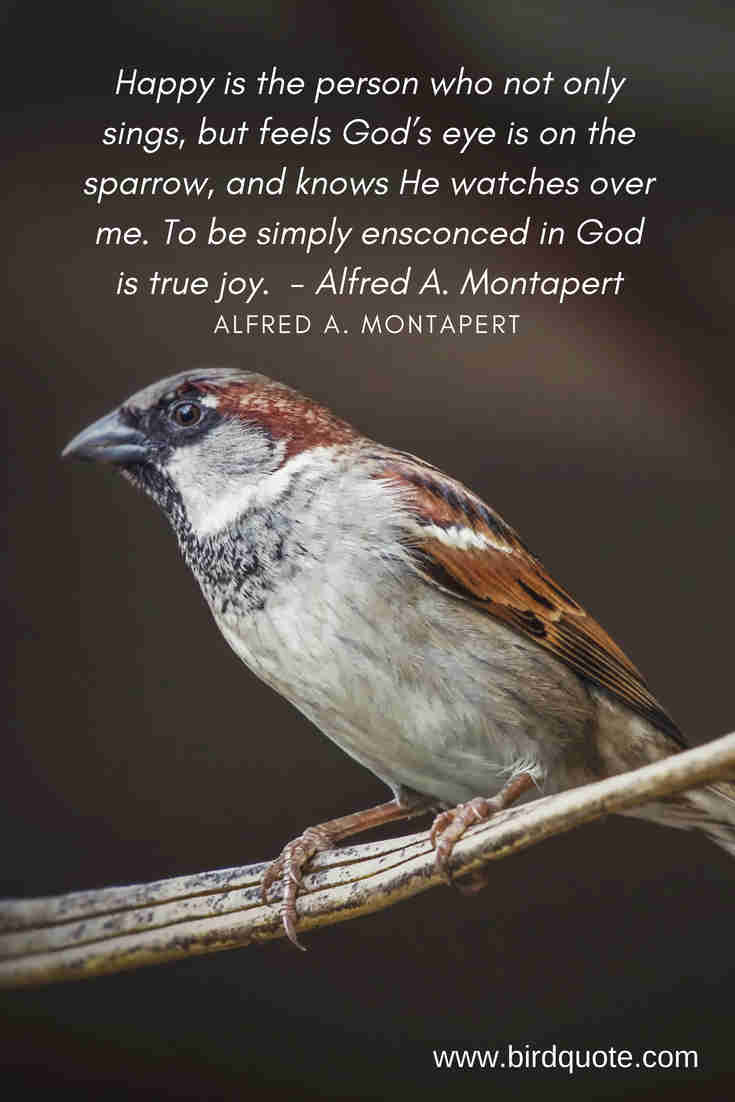 Happy is the person who feels God’s eye is on the sparrow. Sparrows are a family of small passerine birds. Sparrows are also known as true sparrows, or Old World sparrows. Those names are also used for a particular genus of the family, Passer. They are distinct from both the American sparrows, and from a few other birds sharing the same name. Many species nest on buildings.

Sparrows are some of the most familiar of all wild birds. They normally eat seeds. However they also eat small insects. Some sparrows scavenge for food around cities. There are other sparrows that will eat almost anything in small quantities. Some classifications include snowfinches as sparrows.

Some Places where Sparrows are Found

Sparrows are indigenous to Europe, Africa and Asia. Also they are in the Americas, Australia, and other parts of the world. Some sparrow species quickly naturalized in urban and degraded areas. They are also over much of the heavily populated parts of South America.

Sparrows are generally birds of open habitats. That includes grasslands, scrublands and deserts. Ground-sparrows and snowfinches are all species of high latitudes. A few species, like the Eurasian tree sparrow, inhabit open woodland. The unusual habitat of the cinnamon ibon has most of the family inhabiting the cloud forest in the Philippines.

Sparrows are generally social birds and are common sights in many parts of the world. In fact Sparrows may be the most familiar of all wild birds regardless of where you live. Seventeen of the 26 species recognized by the Handbook of the Birds of the World nest on and feed around buildings.

Sparrows are some of the few passerine birds that like dust bathing. They will first scratch a hole in the ground, then lie in it. Then they will fling dirt or sand over their bodies by flicking their wings. Sparrows also bathe in water or in dry or melting snow.

People have kept sparrows as pets throughout history. That’s even though most sparrows are not particularly colorful. Their songs are also unremarkable. But people seem to like sparrows although
they are difficult to keep as pet birds. Pet sparrows must be raised by hand. It takes a considerable amount of insects to feed pet sparrows.

In many works of ancient literature and religious texts in Europe and western Asia, birds usually described later as sparrows are referred to. These references do not always refer specifically to sparrows, but later day writers, inspired by those texts often had house sparrows and other members of the family in mind.

An Alfred A. Montapert Quote