Home Quotes/Quotations Had the pheasant not screamed…

Had the pheasant not screamed…

Had the pheasant not screamed, it wouldn’t have been shot. 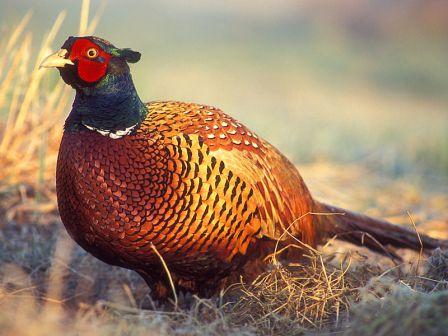 Pheasant : Have you shot - I mean seen - this bird?

The Common Pheasant (Phasianus colchicus), is a bird in the pheasant family (Phasianidae). It is native to Russia and has been widely introduced elsewhere as a game bird.

“Ring-necked Pheasant” is a collective name for a number of subspecies and their crossbreeds.

It is a well-known gamebird, among those of more than regional importance perhaps the most widespread and ancient one in the whole world. The Common Pheasant is one of the world’s most hunted birds.

Adult male unmistakable. Female similar to a number of species of female grouse but has a much longer, pointed tail and bare legs. Female Sharp-tailed Grouse also has a pointed tail but is shorter-necked, has a slight crest, has white outer tail feathers, a shorter tail and feathered legs. Female Sage Grouse has a dark belly patch and feathered legs.

The Ring-necked Pheasant is the state bird of South Dakota, one of only three US state birds that is not a species native to the United States.

There are many color forms of the male Common Pheasant, ranging in color from nearly white to almost black in some melanistic examples.

Common Pheasants feed solely on the ground but roost in sheltered trees at night. They eat a wide variety of animal and vegetable type-food, like fruit, seeds and leaves as well as a wide range of invertebrates, with small vertebrates like snakes, lizards, small mammals and birds occasionally taken.

Had the pheasant not screamed, it wouldn’t have been shot .

Had the pheasant not screamed, it wouldn’t have been shot .