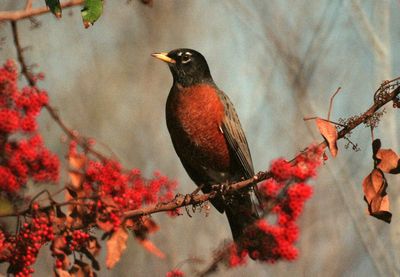 This bird is the largest thrush in North America. It is widely and familiarly known in the United States and Canada. To millions of people it is as well known as the crow, and far more popular.

Their nest is kept scrupulously clean while the nestlings are in it. The parents seize the fecal sacs as they are voided and frequently swallow them. The male parent takes practically full charge of the fledglings. This enables his mate to prepare at once for another brood. They show persistency in their nesting habits, often returning to the same nest or situation year after year.

Various insects which are pests or near pests in woodlots have been identified from stomachs of these common birds. Caterpillars and beetles are the items of animal food taken in greatest quantity by these birds, with bugs, flies, and grasshoppers of considerably less importance. Spiders, earthworms, millipeds, sowbugs, and snails are additional kinds of animal food they will also eat.

Variations:
The early bird gets the worm
Early bird: -means; One that arrives early or something that takes place early or before other things.

Meaning: The person who arrives first has the best chance for success.