God gives every bird his worm…

God gives every bird his worm, but He does not throw it into the nest 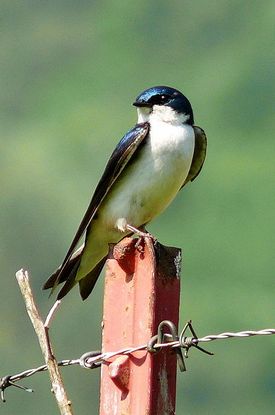 This bird, Tachycineta bicolor, is a migratory passerine bird that breeds in North America and winters in Mexico, Central America and the Caribbean. It is a very rare vagrant to western Europe.

It averages 13.5 cm (5 inches) long and weighs about 20g. The bill is tiny. The adult bird has iridescent blue-green upperparts, white underparts, and a very slightly forked tail. The female usually has duller colors than the male, often more greenish than the more bluish male. The juvenile plumage is dull grey-brown above and may have hint of a gray breast band.

The birds nest in natural or artificial cavities near water and are often found in large flocks. They readily use nest boxes, including those built for bluebirds. Declines in cavity-builder populations are resulting in fewer natural nesting sites for these birds.

God gives every bird his worm, but He does not throw it into the nest.