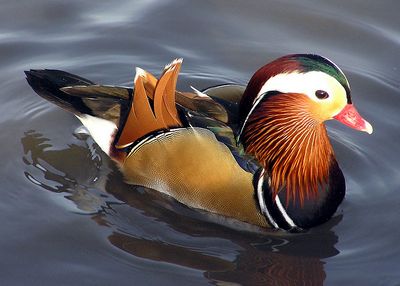 Mandarin duck: Have you seen this bird?

Mandarin Ducks, which are referred to by the Chinese as Yuan-yang, are frequently featured in Oriental art and are regarded as a symbol of conjugal affection and fidelity. The Mandarin Duck symbol is also used in Chinese weddings, because in traditional Chinese lore they symbolize wedded bliss and fidelity.

The average length for the Mandarin Duck is between 43-51cm. Tail length of 10.2-10.4cm. Average bill length of 27.9mm. In full plumage, the male Mandarin is the most beautiful of all ducks.

In the wild, Mandarin Ducks breed in densely wooded areas near shallow lakes, marshes or ponds. They nest in cavities in trees close to water.

Mandarins feed by dabbling or walking on land. They mainly eat plants and seeds, especially beechmast. These ducks feed mostly near dawn or dusk, perching in trees or on the ground during the day.

Mandarin Ducks may form small flocks in winter, but rarely do they associate with other ducks.