A public official or administration serving out a term in office after having been defeated for reelection or when not seeking reelection.

There are several other very similar definitions of this common saying.

–noun
1. an elected official or group of officials, as a legislator, continuing in office during the period between an election defeat and a successor’s assumption of office.
2. a president who is completing a term of office and chooses not to run or is ineligible to run for reelection.
3. a person finishing a term of employment after a replacement has been chosen.
4. anything soon to be supplanted by another that is more efficient, economical, etc.
5. a person or thing that is disabled, helpless, ineffective, or inefficient.
6. a person who has lost a great deal of money in speculations on the stock market. 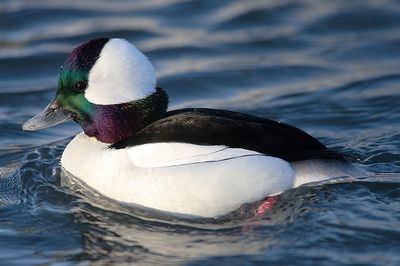 Bufflehead (duck): Have you seen this bird?

The Bufflehead (Bucephala albeola) is a small American sea duck of the genus Bucephala, the goldeneyes.

The name Bufflehead is a combination of buffalo and head, referring to the oddly bulbous head shape of the species. This is most noticeable when the male puffs out the feathers on the head, thus greatly increasing the apparent size of the head.

The Bufflehead are migratory. Most of them winter in protected coastal waters, or open inland waters, on the east and west coasts of North America and the southern United States.

Their breeding habitat is wooded lakes and ponds in Alaska and Canada, almost entirely included in the boreal forest or taiga habitat.

They nest in cavities in trees, often using old Flicker or Pileated Woodpecker nests. These old nests are occasionally about 1400 ft from water.

Buffleheads do not tend to collect in huge flocks. Groups are usually limited to small numbers of less than 10. One duck will serve as a sentry, watching for predators as the others in the group dive in search of food.