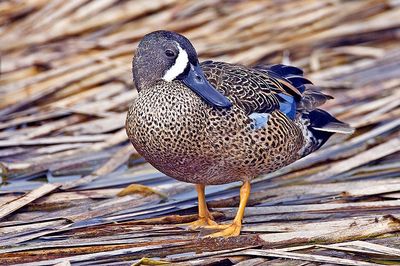 Blue-Winged Teal: Have you seen this bird?

The Blue-winged Teal (Anas discors) is a small dabbling duck.

Their breeding habitat is marshes and ponds throughout north and central North America. Their range is all of North America except western and northern Alaska, and the highest parts of the continent. They are rare in the desert southwest, and the west coast.

Adult in alternate plumage is unmistakable. Female, immature and eclipse male similar to Green-winged and Cinnamon Teals. Note the small size and small bill of the Green-winged Teals as well as the green speculum. Cinnamon Teal is very difficult to distinguish in some (female) plumages, but note the smaller bill without a spatulate tip and the more distinct facial pattern (pale loral spot and more distinct eye line) of the Blue-winged Teal.

They migrate in flocks to Central and South America. Some birds winter on the Gulf Coast and coastal California.

Blue-winged Teals feed by dabbling in shallow water at the edge of marshes or open water[2]. They mainly eat plants; their diet may include mollusks and aquatic insects.