Tweety is a fictional Yellow Canary in the Warner Bros. Looney Tunes and Merrie Melodies series of animated cartoons.

Tweety’s popularity actually grew in the years following the dissolution of the Looney Tunes cartoons. The name “Tweety” is a play on words, as it originally meant “sweetie”, along with “tweet” being a typical English onomatopoeia for the sounds of birds. Tweety appeared in 48 cartoons. 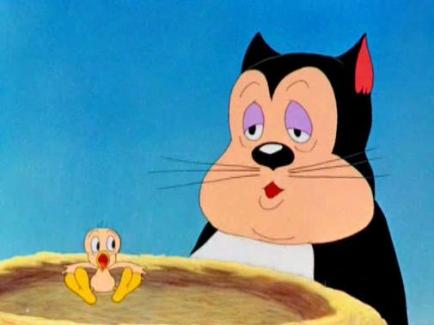 Despite the perceptions that people may hold, owing to the long lashes and high pitched voice of Tweety, Tweety is male. This was established several times in the series “Sylvester and Tweety Mysteries”.

On the other hand, his species is ambiguous; although originally and often portrayed as a young canary, he is also frequently called a rare and valuable “tweety bird” as a plot device, and once called “the only living specimen”. Nevertheless, the title song directly states that the bird is a canary.

Bob Clampett created the character that would become Tweety in the 1942 short A Tale of Two Kitties, pitting him against two hungry cats named Babbit and Catstello (based on the famous comedians Abbott and Costello). 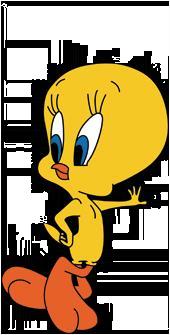 Tweety was originally not a domestic canary, but simply a generic, wild, baby bird in an outdoors nest – naked (pink), jowly, and also far more aggressive and saucy, as opposed to the later, more well-known version of him as a less hot-tempered and somewhat ornery, yellow canary.

|||||||
AAAAAAAAH! You cwushed my widdy head! AH HA HA HAAAAAAA! You mashed me widdle metatarsel!!
– from Tweety’s second cartoon, Birdy and the Beast (1944)

|||||||
Dat puddy is going to be in an awful predicament when dat medicine start to woik. Ho ho ho!

|||||||
Don’t hit him, Granny. Don’t hit him Granny! You’ll be sowwy! – this was after Slyvester has swallowed a beaker of Nitro – Granny did hit Slyvester and both are blown up

|||||||
Go away fwom here and stop making all dat noise or I’ww have you twansfered to the stix!

|||||||
Gosh, I never wealized that being a wittle bird could be so compwicated.

|||||||
I see an unidentified object flying awound my wittle head.

|||||||
I tawt I taw dishonorable puddy tat! – the giant lands on poor Sylvester with such force that the cat crashes straight through the earth, emerging head-first in China.
– In Tweety and the Beanstalk (1957),

|||||||
It was a terrible storm, the boat wocked and worked up one wave and down the other. Wocking. Wocking.

|||||||
Now who do you suppose would want to disturb those doggies so earwy in da morning?!

|||||||
OOOOOOOOH but tometing tells me dat puddy is tomewhere awound here cwose to me. With his wong teeth and his sharp cwaws. OOOH, I SCARED!!

|||||||
Yeah how many times have we told you not to put things in your mouth! Especially me!

|||||||
You know, I lose more putty tats dat way! – Tweety’s final line after he steered Sylvester into a brick wall

*Tweety quotes taken from many sources, most with no source information
Authenticity not guaranteed but quotes displayed as found