|||||||
So have I heard the cuckoo’s parting cry, From the wet field, through the vext garden trees, Come with the volleying rain and tossing breeze: ‘The bloom isgone, and with the bloom go I.’
– Arnold, Matthew

|||||||
Spring, the sweet spring, is the year’s pleasant king, Then blooms each thing, then maids dance in a ring, Cold doth not sting, the pretty birds do sing: Cuckoo, jug-jug, pu-we, to-witta-woo!
– Nashe,Thomas

|||||||
Sweet bird! thy bower is ever green, Thy sky is ever clear; Thou hast no sorrow in thy song, No winter in thy year.
– John Logan

|||||||
Switzerland is a small, steep country, much more up and down than sideways, and is all stuck over with large brown hotels built on the cuckoo clock style of architecture.
– Hemingway, Ernest 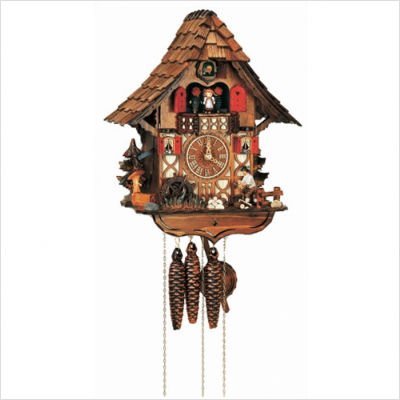 |||||||
The Attic warbler pours her throat Responsive to the cuckoo’s note.
– Thomas Gray

|||||||
The cuckoo comes in April, and stays the month of May; sings a song at midsummer, and then goes away.
– Traditional Proverb

|||||||
The cuckoo then on every tree,
Mocks married men; for thus sings he,
Cuckoo!
Cuckoo! Cuckoo! O word of fear,
Unpleasing to a married ear.
– William Shakespeare

|||||||
The cuckoo who is on to himself is halfway out of the clock.
– Wilson Mizner

|||||||
This is the weather the cuckoo likes, And so do I; When showers betumble the chestnut spikes, And nestlings fly: And the little brown nightingale bills his best, And they sit outside at ‘TheTravellers’ Rest’, And maids come forth sprig-muslin drest, And citizens dream of the south and west, And so do I.
– Hardy,Thomas

|||||||
“You see, cuckoos are parasites. They lay their eggs in other birds’ nests. When the egg hatches, the baby cuckoo pushes the other baby birds out of the nest. The poor parent birds work themselves to death trying to find enough food to feed the enormous cuckoo child who has murdered their babies and taken their places.”
“Enormous?” said Jace. “Did you just call me fat?”
“It was an analogy.”
“I am not fat.”
— Cassandra Clare [City of Ashes]

|||||||
When daisies pied and violets blue And lady-smocks all silver-white And cuckoo-buds of yellow hue Do paint the meadows with delight, The cuckoo then, on every tree, Mocks married men: for thus sings he, Cuckoo; Cuckoo, cuckoo: O, word of fear, Unpleasing to a married ear!
– William Shakespeare

|||||||
While I deduce, From the first note the hollow cuckoo sings, The symphony of spring.
– James Thomson (1)