The number of eggs in each clutch ranges from three to eight.

Young swans are known as cygnets, or as swanlings. An adult male is a cob; an adult female is a pen.

The swans are the largest members of the duck family Anatidae, and are amongst the largest flying birds. The largest species, including the mute swan, trumpeter swan, and whooper swan, can reach length of over 60 inches and weigh over 33 pounds. Their wingspans can be almost 10 ft.

The Trumpeter Swan, Cygnus buccinator, is the largest native North American bird, if measured in terms of weight and length, and is (on average) the largest living waterfowl species on earth. It is the North American counterpart of the European Whooper Swan. 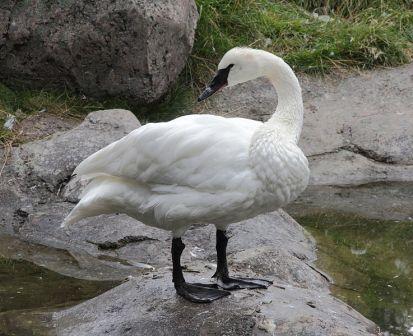 A Trumpeter Swan (Cygnus buccinator) at the Calgary Zoo: Click for image Credit

|||||||
And now this pale swan in her watery nest
Begins the sad dirge of her certain ending.
– William Shakesphere

|||||||
And over the pond are sailing Two swans all white as snow; Sweet voices mysteriously wailing Pierce through me as onward they go. They sail along, and a ringing Sweet melody rises on high; And when the swans begin singing, They presently must die.
– Heinrich Heine

|||||||
As I have seen a swan
With bootless labour swim against the tide
And spend her strength with over-matching waves.
– William Shakespeare

|||||||
Being born in a duck yard does not matter, if only you are hatched from a swan’s egg.
– Hans Christian Anderson

|||||||
But when the swan departs, you shall remain behind, like an abandoned woman.
– Sri Guru Granth Sahib

|||||||
Coal-black is better than another hue In that it scorns to bear another hue; For all the water in the ocean Can never turn the swan’s black legs to white, Although she lave them hourly in the flood.
– William Shakespeare

|||||||
Death darkens his eyes, and unplumes his wings, Yet the sweetest song is the last he sings: Live so, my Love, that when death shall come, Swan-like and sweet it may waft thee home.
– Cicero (Marcus Tullius Cicero)

|||||||
Destiny has brought together and united the body and the soul-swan. He who created them, also separates them.
– Sri Guru Granth Sahib

|||||||
[Even the warhorses have been exercised. Five years ago, McKenzie came out with a new staging of Swan Lake that] whipped the audience at the Metropolitan Opera House into a frenzied ovation, … a ballet for both the tired critic and the tired businessman.
– Anna Kisselgoff

|||||||
Even though the Swans have been there for over 20 years now and really built up a loyal following, AFL on television does not attract the sort of audiences we would like, … We would just have got killed if we went in any earlier. We are putting it on at 10pm, which is not what I would call late, but we would get hammered if we put it on live.
– David White

|||||||
Everybody in the United Kingdom classes the swan as a royal bird. They have everybody’s hearts.
– David Barber

|||||||
Her tongue will not obey her heart, nor can Her heart inform her tongue–the swan’s down-feather That stands upon the swell at full of tide, And neither way inclines.
– William Shakespeare

|||||||
I am the cygnet to this pale faint swan, Who chants a doleful hymn to his own death, And from the organ-pipe of fraity sings His soul and body to their lasting rest.
– William Shakespeare 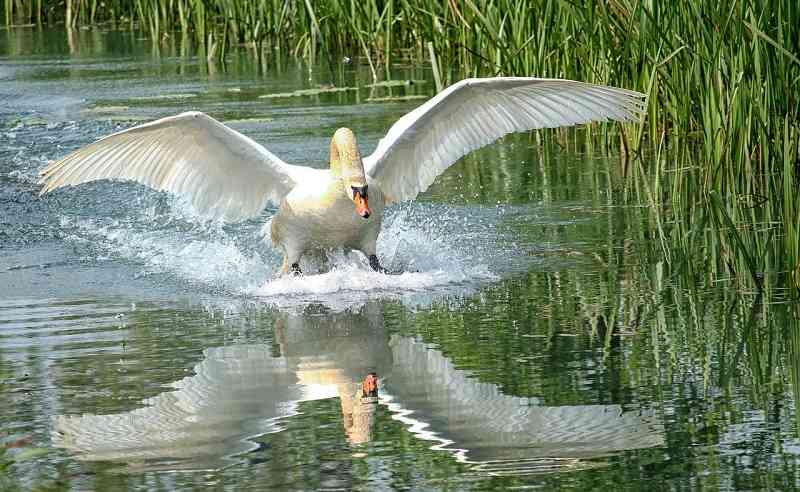 |||||||
I have had so many great moments, but I would have to say that dancing the Swan in ‘Swan Lake’ was such a unique and passionate experience for me. It was such bloody hard work, even at that very early age, that I would not want to try to replicate it again now.
– Will Kemp

|||||||
In one way, the fickle fish of the mind will be held steady; the swan-soul shall not fly away, and the body-wall will not crumble
– Sri Guru Granth Sahib

|||||||
I was in two episodes playing Christopher Reeve’s character’s emissary. They wanted to have my character announce Dr Swan’s death, which I thought was exploitative.
– Margot Kidder

|||||||
I was like a swan – sort of gliding on the top, but my legs were paddling underneath.
– Lee Westwood

|||||||
It is best to live with honor for just a day than with dishonor for many decades; better a short lived celestial swan than a century-lived crow.
– Sri Sathya Sai Baba

|||||||
I’ve developed into quite a swan. I’m one of those people that will probably look better and better as I get older – until I drop dead of beauty.
– Rufus Wainwright