swan
1 [swon]
–noun
1. any of several large, stately aquatic birds of the subfamily Anserinae, having a long, slender neck and usually pure-white plumage in the adult. Compare mute swan, trumpeter swan, whistling swan, whooper swan.
2. a person or thing of unusual beauty, excellence, purity, or the like.
3. Literary . a person who sings sweetly or a poet.
4. ( initial capital letter ) Astronomy . the constellation Cygnus.

— n
1. any large aquatic bird of the genera Cygnus and Coscoroba, having a long neck and usually a white plumage: family Anatidae, order Anseriformes
2. rare , literary
a. a poet
b. ( capital when part of a title or epithet ): the Swan of Avon (Shakespeare)

— vb , swans , swanning , swanned
3. informal ( intr; usually foll by around or about ) to wander idly 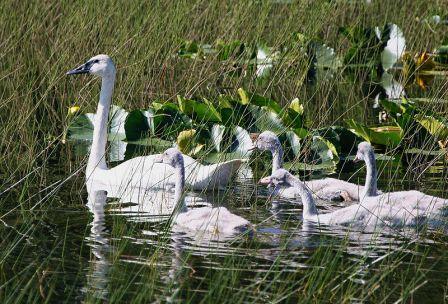 |||||||
Terry backed up and did a swan dive into the water and was swimming after the fish and the rod. It’s the only time I ever saw a fish catch a man.
– Curt Gowdy

|||||||
That was ugly. I was waiting for the ugly duckling to turn into the swan, but it never happened.
– Dave Huber

|||||||
The dying swan, when years her temples pierce, In music-strains breathes out her life and verse, And, chanting her own dirge, tides on her wat’ry hearse.
– Phineas Fletcher

|||||||
The evening advanced. The shadows lengthened. The waters of the lake grew pitchy black. The gliding of the ghostly swans became rare and more rare.
– Wilkie Collins

|||||||
The silver swan, who living had no note, When death approached, unlocked her silent throat; Leaning her breast against the reedy shore, Thus sung her first and last, and sung no more: ‘Farewell, all joys; Oh death, come close mine eyes; More geese than swans now live, more fools than wise.’
-Gibbons, Orlando

|||||||
The stately-sailing swan Gives out his snowy plumage to the gale; And, arching proud his neck, with oary feet Bears forward fierce, and guards his osier isle, Protective of his young.
– James Thomson

|||||||
The swan in the pool is singing, And up and down doth he steer, And, singing gently ever, Dips under the water clear.
– Heinrich Heine

|||||||
The swan is not without cause dedicated to Apollo, because foreseeing his happiness in death, he dies with singing and pleasure.
– Cicero (Marcus Tullius Cicero)

|||||||
The swan murmurs sweet strains with a flattering tongue, itself the singer of its own dirge.
– Marcus Valerius Martial

|||||||
The swan, like the soul of the poet, By the dull world is ill understood.
– Heinrich Heine

|||||||
The swan, with arched neck Between her white wings mantling proudly, rows Her state with oary feet.
– John Milton

|||||||
The Teutons have been singing the swan song ever since they entered the ranks of history. They have always confounded truth with death.
– Henry Miller

|||||||
The wild swan’s death-hymn took the soul Of that waste place with joy Hidden in sorrow: at first to the ear The warble was low, and full and clear.
– Lord Alfred Tennyson

|||||||
The woods decay, the woods decayand fall, The vapours weep their burthen to the ground, Man comes and tills the field and lies beneath, And after manya summer dies the swan. Me only cruel immortality Consumes: I wither slowly in thine arms, Here at the quiet limit of the world.
– Lord Alfred Tennyson

|||||||
There is nothing more poetic and terrible than the skyscrapers’ battle with the heavens that cover them. Snow, rain, and mist highlight, drench, or conceal the vast towers, but those towers, hostile to mystery and blind to any sort of play, shear off the rain’s tresses and shine their three thousand swords through the soft swan of the fog.
– Federico Garcia Lorca

|||||||
There?s no question that the prettiest part of the course is where Swan Creek goes through the property.
– Dan Hathaway

|||||||
There’s a double beauty whenever a swan Swims on a lake with her double thereon.
– Thomas Hood

|||||||
They depart with their thoughts well-collected, they are not happy in their abode; like swans who have left their lake, they leave their house and home.
– Friedrich Max Muller

|||||||
Those who have high thoughts are ever striving; they are not happy to remain in the same place. Like swans that leave their lake and rise into the air, they leave their home and fly for a higher home.
– The Dhammapada

|||||||
Thus does the white swan, as he lies on the wet grass, when the Fates summon him, sing at the fords of Maeander.
– John Milton

|||||||
To begin with, we emphasize that pumping water from the lake will actually help Swan Lake and will not hurt it at all. We’ll be pumping from the bottom of the lake, and that will stimulate the flow more so than it is now.
– Wendell T. Nealon